As of Thursday, May 26, it’s official; semiconductor giant Broadcom Inc. (

The immediate market reaction to the deal was lackluster, with shares of both companies rising a little over 3.5%, but that was likely due in part to prior speculation about the deal already pushing shares up earlier this week.

Broadcom has been pursuing an acquisition-based growth strategy in recent years under President and CEO Hock Tan. Tan told investors in March that the company was on the hunt for deals and had the capacity for a “good size” acquisition, and several analysts speculated that VMware might be a possible acquisition target.

Broadcom is already one of the largest semiconductor companies in the U.S., taking up 10.29% of the sector’s publicly traded value with a market cap of $225.70 billion. However, it has been working to diversify itself in order to realize synergies across segments, improve supply chain efficiencies and build network effects. 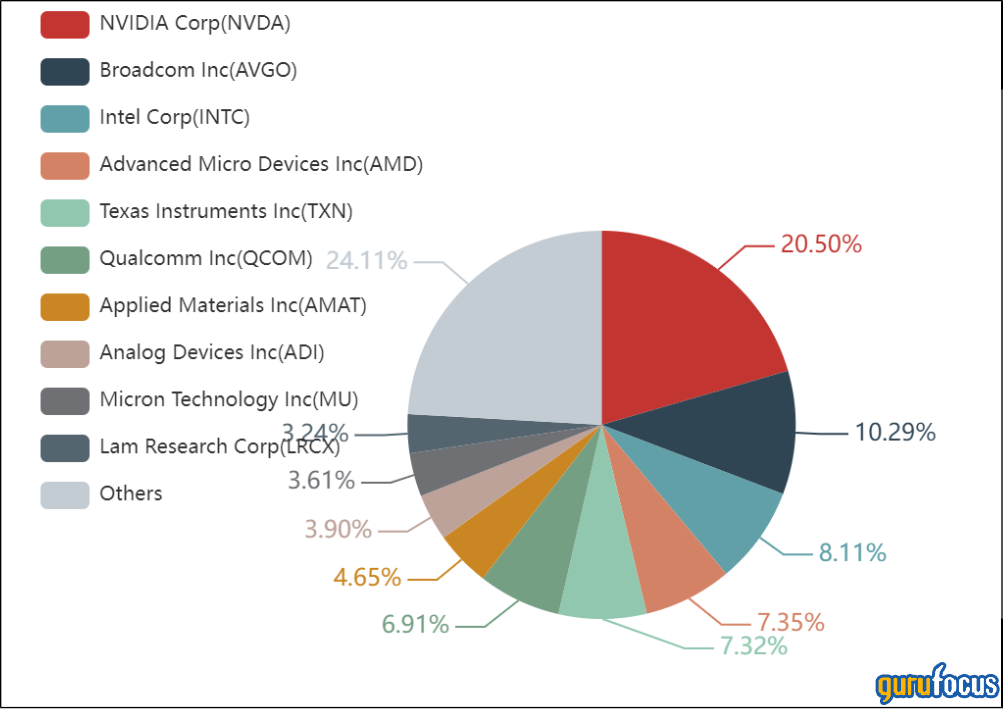 Acquiring VMware would be a great step toward these goals, but at the same time, VMware would likely see its valuation compressed thanks to the conglomerate discount. Moreover, VMware has lower margins than Broadcom, which could further drag down Broadcom’s valuation. Is this deal really worth it in light of the potential for devaluation? Let’s take a look.

If completed, the cash-and-stock deal will be one of the biggest tech acquisitions ever, building off of this year’s trend of enormous tech deals alongside Elon Musk’s planned $44 billion acquisition of Twitter (

The $61 billion figure represents a 44% premium to the closing price on May 20, which was the last trading day free from the influence of Bloomberg News reporting the two companies were in talks. For each share of VMware they own, investors will be able to choose to receive either $142.50 in cash or 0.2520 shares of Broadcom common stock. This would leave Broadcom shareholders with 88% of the combined company and VMware shareholders with 12%.

To fund the deal, Broadcom reports it has already secured $32 billion in new debt, and it also plans to assume $8 billion of VMware’s debt.

Michael Dell (Trades, Portfolio) and Silver Lake have signed support agreements for the deal, reducing the risk of it falling through, according to the acquisition announcement press release from Broadcom:

Michael Dell (Trades, Portfolio) and Silver Lake, which own 40.2% and 10% of VMware shares outstanding, respectively, have signed support agreements to vote in favor of the transaction, so long as the VMware Board continues to recommend the proposed transaction with Broadcom.”

It is still possible that the deal could fall through, though. The merger has a “go-shop” provision that gives VMware through July 5 to solicit, receive and consider bids from other potential suitors. There is also the potential for regulatory issues.

Once the deal closes, Broadcom plans to rebrand its software group to the VMware name, incorporating Broadcom’s infrastructure and security software solutions to support VMware’s growth.

The diversification aspect is much-needed at this time as supply chain difficulties put pressure on Broadcom’s semiconductor business. On paper, with Broadcom reporting semiconductor revenue growth of 20% year over year for its first quarter of fiscal 2022, everything may seem great. However, the top-line increase merely mirrors the company’s ability to pass on higher production costs to consumers due to demand outpacing supply; Tan said when all factors are taken into account, demand growth was only 2%.

In the long term, greater diversification will help the company realize higher operational synergies such as networking effects and cross-selling. Broadcom and VMware’s offerings are highly complementary from the customer’s perspective, which could go a long way toward making both operations and research and development more efficient.

The acquisition is expected to accelerate software innovation and growth opportunities for Broadcom by expanding capabilities for enterprise infrastructure and cloud computing. By combining their individual areas of expertise, the companies could develop products faster and better. The press release claims:

“The combined solutions will enable customers, including leaders in all industry verticals, greater choice and flexibility to build, run, manage, connect and protect applications at scale across diversified, distributed environments, regardless of where they run: from the data center, to any cloud and to edge-computing.”

The major concern from the investor’s standpoint is that this merger could have a negative effect on valuation multiples. Currently, both companies trade with a price-earnings ratio around 30.

While pursuing an acquisition-based growth model, the share price can rise quickly as growth numbers impress, but after a certain point, investors typically begin to assign a “conglomerate discount” to the more cluttered companies.

Broadcom is already modestly overvalued according to the GF Value chart. The PEG ratio is 0.99 though, which indicates fair value when we take historical growth into consideration. 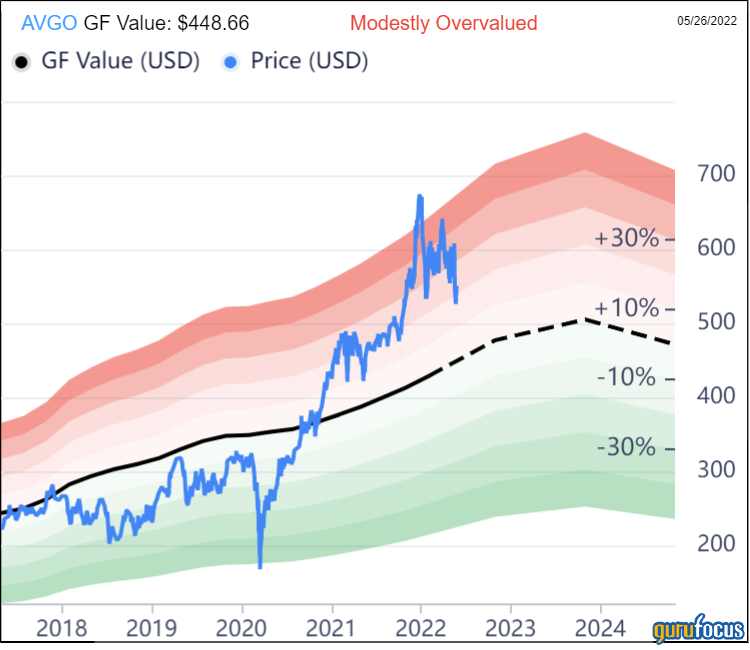 There’s also margins to consider. VMware’s operating and net margins are lower than Broadcom’s. If this translates to margins dropping for the combined company, some investors may take this as a sign it is struggling, though it is possible that the combined companies will realize operational synergies that make up the gap. 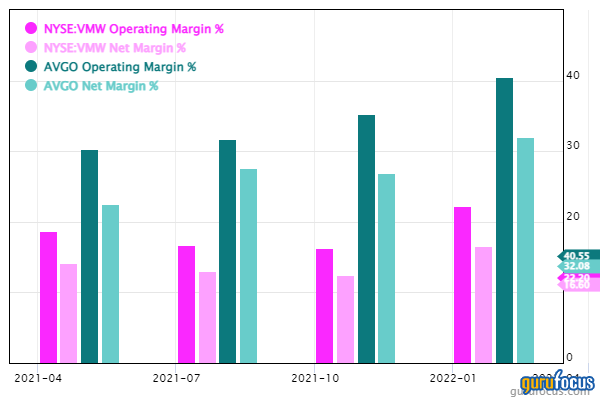 Overall, VMware appears to be a good acquisition candidate that falls in line with Broadcom’s growth strategy. If completed, the deal will likely become value-accretive very quickly, and since both businesses generate positive profits at decent margins, investors can rest assured it is not one of those cases where a profitable company acquires a cash-burner that has yet to prove its ability to help the bottom line.

It is possible that the combined company could face a conglomerate discount, and we are also headed into bearish market conditions, so cautious investors may not feel the risk is worth the return here.

Using the valuation method inherent in the deal itself, VMware currently trades at $124.36 per share compared to the cash acquisition price of $142.50 per share. Assuming the deal closes in one and a half years, that implies an annualized return of approximately 9.72% minus transaction costs.