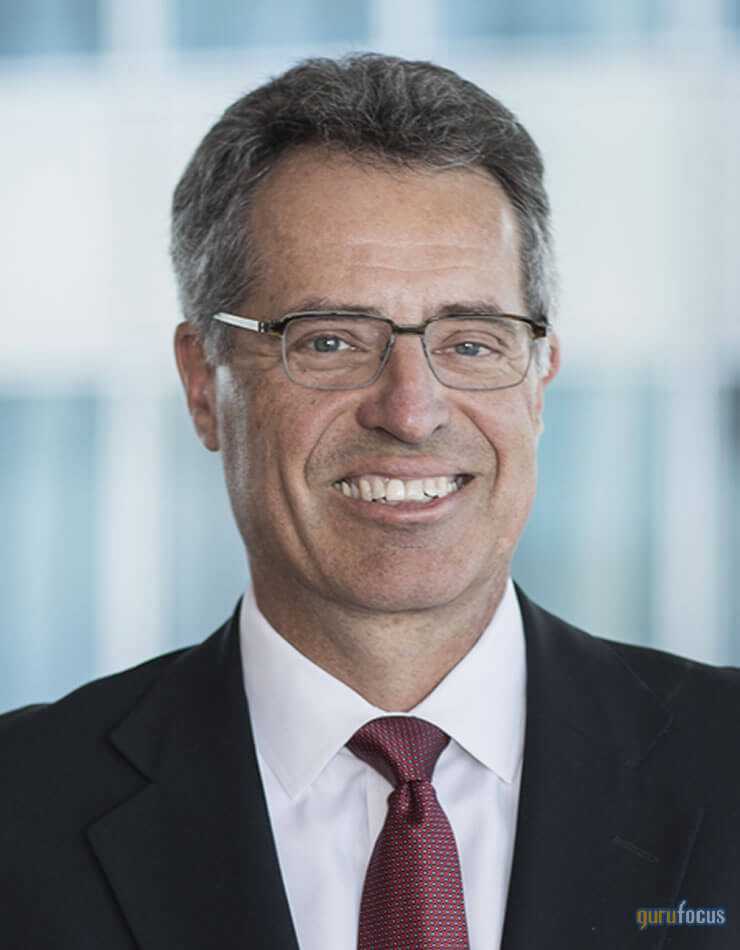 In order to achieve long-term capital appreciation, the renowned guru, who also manages the Chicago-based firm’s Select and Global Select funds, usually invests in mid- and large-cap companies. When picking stocks, he looks for growing companies that have shareholder-oriented management teams. According to the fund’s fact sheet, he prefers to take a position when the stock is trading at a substantial discount to his estimate of intrinsic value, then waits for the gap between the two to close before selling.

In his commentary for the three-month period ended March 31, Nygren discussed the current market environment in light of the Covid-19 pandemic, geopolitical tensions and continued supply chain shortages. He wrote:

“When confronted with global uncertainty, it can be difficult to imagine what the next year or even the next month will bring, and that can be scary. But at Oakmark, we are anchored by an investment philosophy that exploits deviations between current prices and long-term values. We only own stocks that are selling at unusually large discounts to what we believe those businesses will be worth roughly seven years from now. The events investors worry about might lead to significant reductions in current earnings, but that is usually transitory. It is rare for such issues to cause meaningful reductions in estimates of long-term business value. That is why in periods of high volatility, as occurred this past quarter, we see opportunity and often make more portfolio changes than usual.”

Keeping these considerations in mind, the 13F filing showed Nygren established five new positions during the quarter, sold out of three stocks and added to or trimmed a slew of other existing investments. Notable trades included new holdings of Pinterest Inc. (

Investors should be aware that 13F filings do not give a complete picture of a firm’s holdings as the reports only include its positions in U.S. stocks and American depository receipts, but they can still provide valuable information. Further, the reports only reflect trades and holdings as of the most-recent portfolio filing date, which may or may not be held by the reporting firm today or even when this article was published.

PINS, Financial), allocating 1.47% of the equity portfolio to the stake. The stock traded for an average price of $27.34 per share during the quarter. He previously sold out of the stock in the third quarter of 2020.

The San Francisco-based social networking company, which operates a platform where users can save and share everything from fashion and favorite books and shows to recipes, craft ideas and art, has a $12.67 billion market cap; its shares were trading around $19.10 on Thursday with a price-earnings ratio of 36.8, a price-book ratio of 3.77 and a price-sales ratio of 4.52.

The GF Value Line suggests the stock is significantly undervalued currently based on historical ratios, past financial performance and future earnings projections. 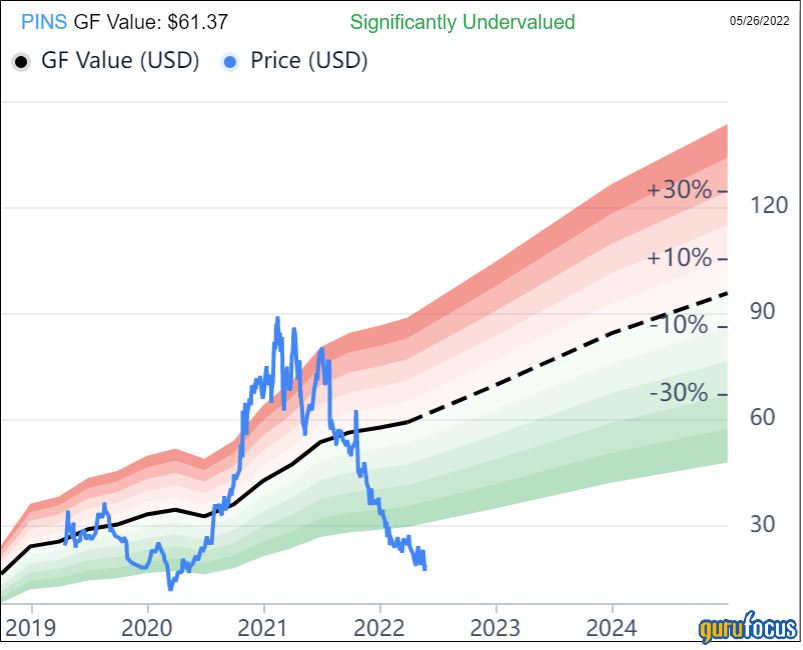 In his quarterly letter, Nygren highlighted that he feels Pinterest’s “shares trade well below fair value on conventional metrics, such as enterprise value to revenue, as well as when we benchmark its ultimate revenue and margin potential against more mature internet companies.”

GuruFocus rated Pinterest’s financial strength 9 out of 10 on the back of adequate interest coverage and a robust Altman Z-Score of 16.26 that indicates it is in good standing. The return on invested capital also overshadows the weighted average cost of capital, meaning value is being created as the company grows.

The company’s profitability did not fare as well, scoring a 2 out of 10 rating despite having margins and returns on equity, assets and capital that top over half of its competitors. Pinterest also has a high Piotroski F-Score of 7 out of 9, which indicates operations are healthy.

CRM, Financial), dedicating 1.26% of the equity portfolio to the holding. Shares traded for an average price of $215.18 each during the quarter.

The company headquartered in San Francisco, which provides cloud-based customer relationship management software and other enterprise solutions, has a market cap of $159.29 billion; its shares were trading around $160.17 on Thursday with a price-earnings ratio of 106.84, a price-book ratio of 2.73 and a price-sales ratio of 5.91.

According to the GF Value Line, the stock is significantly undervalued currently. 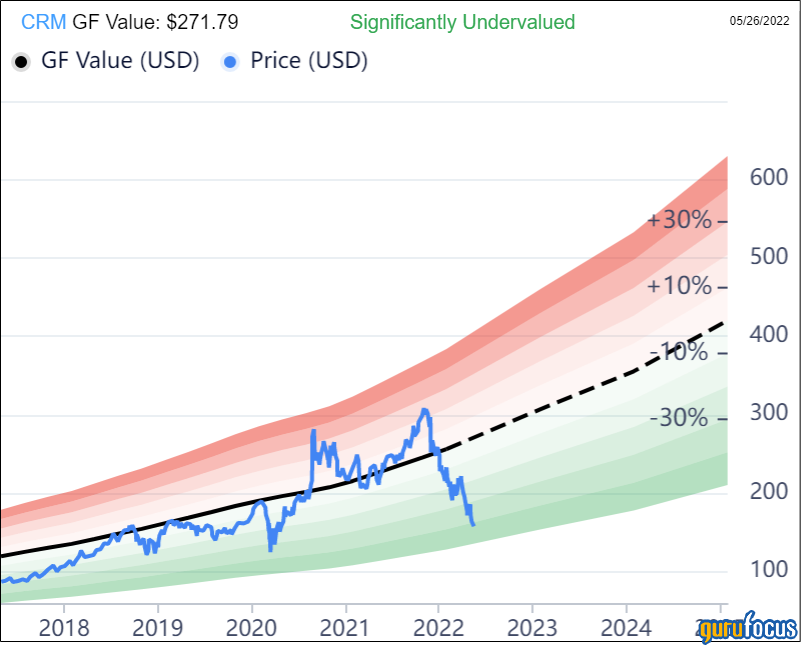 The guru noted in his quarterly commentary that he feels the “renewed focus on profitability, combined with Salesforce’s strong underlying business characteristics, will yield strong results.”

Salesforce’s financial strength was rated 6 out of 10 by GuruFocus. The high Altman Z-Score of 3.02 indicates the company is in good standing even though assets are building up at a faster rate than revenue is growing. As the ROIC is eclipsed by the WACC, however, the company may be struggling to create value.

The company’s profitability fared a bit better with a 7 out of 10 rating despite having a declining operating margin and returns that underperform over half of its industry peers. Salesforce also has a moderate Piotroski F-Score of 4, suggesting business conditions are typical for a stable company. Consistent earnings and revenue growth also contributed to a predictability rank of 4.5 out of five stars. GuruFocus data shows companies with this rank return an average of 10.6% annually over a 10-year period.

EFX, Financial), giving it 1.2% space in the equity portfolio. The stock traded for an average per-share price of $235.50 during the quarter.

Based on the GF Value Line, the stock appears to be modestly undervalued currently. 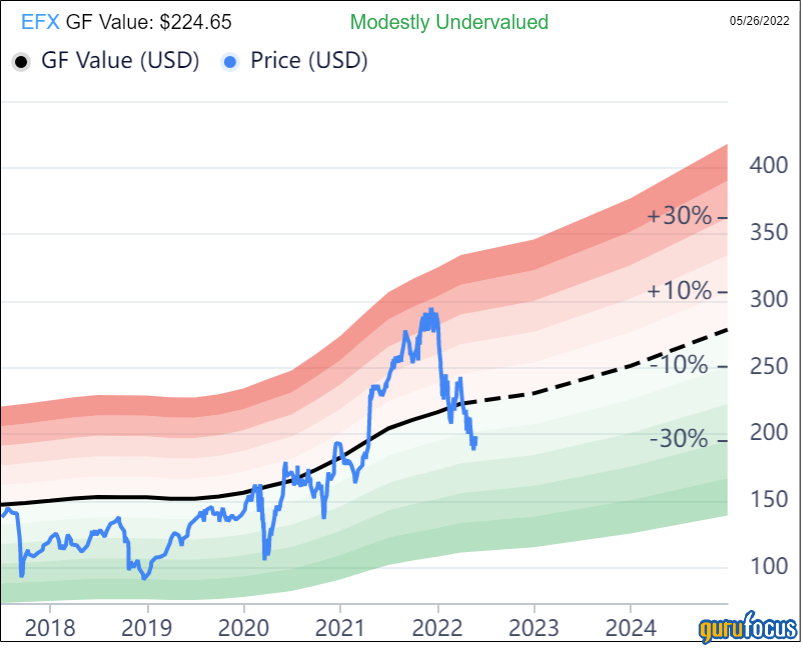 Nygren said in his quarterly commentary that while the company competes in a triopoly with two other credit bureaus, its proprietary Workforce Solutions database sets it apart.

“Workforce Solutions is an income and employment database used to evaluate the creditworthiness of a consumer in real-time,” he wrote. “Furthermore, Equifax’s collection of alternative data is becoming increasingly important to lenders so they can assess the creditworthiness of consumers with thin or even nonexistent credit files.”

GuruFocus rated Equifax’s financial strength 5 out of 10. Although the company has issued new long-term debt in recent years, it is still manageable due to sufficient interest coverage. The Altman Z-Score of 3.17 also indicates it is in good standing even though the Sloan ratio is indicative of poor earnings quality.

The company’s profitability scored an 8 out of 10 rating, driven by strong margins and returns that outperform a majority of competitors. Equifax also has a moderate Piotroski F-Score of 4 as well as a one-star predictability rank. According to GuruFocus research, companies with this rank return an average of 1.1% annually.

Gore’s firm has the largest stake in Equifax with 3.61% of its outstanding shares.

GPN, Financial), expanding the equity portfolio by 1.14%. During the quarter, the stock traded for an average price of $139.81 per share.

The payment processing and software solutions company, which is headquartered in Atlanta, has a market cap of $36.05 billion; its shares were trading around $127.69 on Thursday with a price-earnings ratio of 36.7, a price-book ratio of 1.44 and a price-sales ratio of 4.27.

The GF Value Line suggests the stock is currently a possible value trap. As such, potential investors should do thorough research before making a decision. 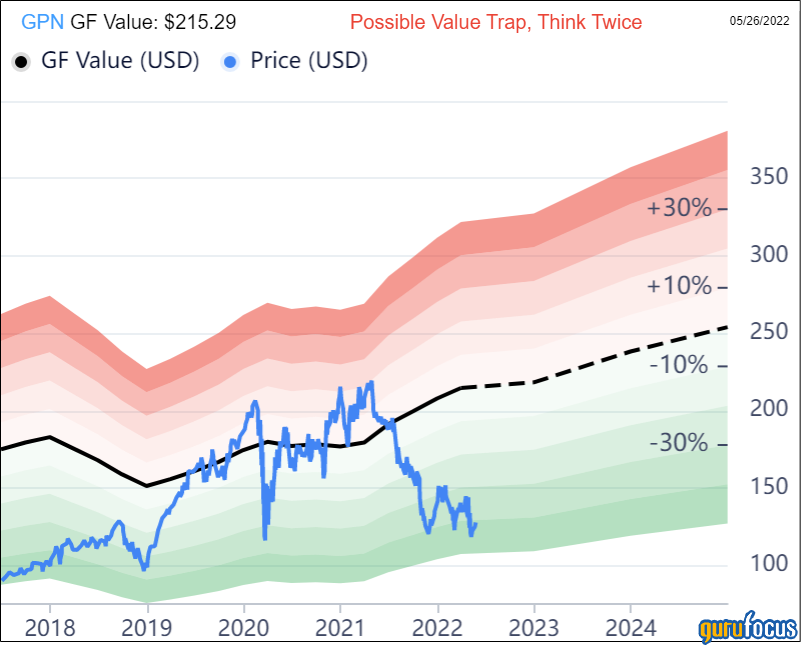 Nygren noted in his commentary that the company’s merchant acquiring business is “well positioned” and is “one of the fastest-growing parts of the industry.”

“In addition, Global Payments benefits from the broader secular shift away from cash and toward electronic payment methods,” he wrote. “Together, these tailwinds have the potential to drive low-double-digit revenue growth and even faster earnings growth.”

Global Payments’ financial strength was rated 5 out of 10 by GuruFocus. As a result of issuing approximately $3 billion in new long-term debt over the past three years, the company has weak interest coverage. The low Altman Z-Score of 1.46 also warns the company could be at risk of bankruptcy, while assets are building up at a faster rate than revenue is growing. The WACC also exceeds the ROIC, indicating the company is struggling to create value.

The company’s profitability fared better, scoring a 9 out of 10 rating on the back of strong margins. Returns, however, are underperforming versus industry peers. Global Payments also has a high Piotroski F-Score of 7, while steady earnings and revenue growth contributed to a four-star predictability rank. GuruFocus says companies with this rank return, on average, 9.8% annually.

Holding 0.84% of its outstanding shares,

The guru dumped its 945,200 remaining shares of Automatic Data Processing (

ADP, Financial), impacting the equity portfolio by -1.36%. Shares traded for an average price of $214.12 each during the quarter.

GuruFocus data shows Nygren gained an estimated 124.29% on the investment over its lifetime.

Commonly known as ADP, the Roseland, New Jersey-based company, which provides human resources management software, has a $90.66 billion market cap; its shares were trading around on $217.03 on Thursday with a price-earnings ratio of 32.06, a price-book ratio of 21.64 and a price-sales ratio of 5.86.

According to the GF Value Line, the stock is fairly valued currently. 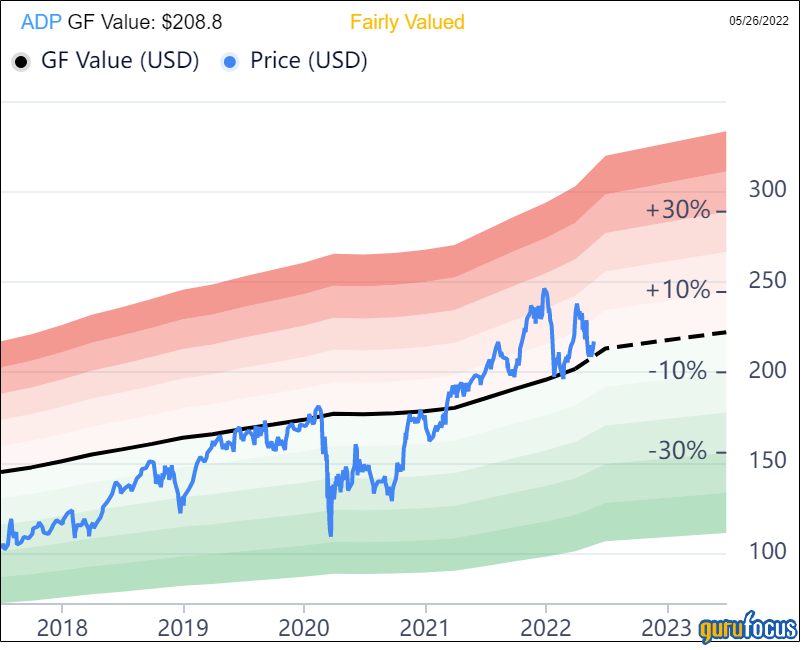 GuruFocus rated ADP’s financial strength 6 out of 10. Despite the company issuing new long-term debt in recent years, it is manageable due to a comfortable level of interest coverage. However, the low Altman Z-Score of 1.59 warns the company could be at risk of bankruptcy. The WACC also surpasses the ROIC, indicating it struggles to create value.

The company’s profitability fared better with an 8 out of 10 rating, driven by an expanding operating margin, strong returns that outperform a majority of competitors and a moderate Piotroski F-Score of 4. ADP also has a 3.5-star predictability rank due to consistent earnings and revenue growth. GuruFocus research has found companies with this rank return an average of 9.3% annually.

During the quarter, Nygren also entered a position in PulteGroup Inc. (

The Oakmark Fund’s $16.79 billion equity portfolio, which is composed of 57 stocks, is most heavily invested in the financial services sector.