Cybersecurity is a growing necessity in our modern, digitally connected world. Whether it’s the need to secure devices working remotely or to protect pipelines from hackers, cybersecurity has been called the fourth defensive strategy (the other three being land, air and sea).

According to Global Newswire, the cybersecurity market globally is forecasted to increase at a 12% compound annual growth rate between 2022 and 2028, reaching a size of $366 billion. With the Russia-Ukraine crisis heating up and tensions with China and Taiwan, cybersecurity is at the forefront of everyone's mind. However, there has been a problem in the industry as enterprises have clunky on-premise IT setups with little flexibility for instant upgrades and threat detection. This is where CrowdStrike Holdings Inc. (

CrowdStrike was founded in 2011 with a goal to reinvent security for the cloud. The company has leading, patent-protected technology which has seen huge revenue growth of 81% in the prior year and 65% expected moving forward. The share price is down 31% from its highs in November 2021 as inflation and rising interest rates have caused growth stock multiples to compresss. 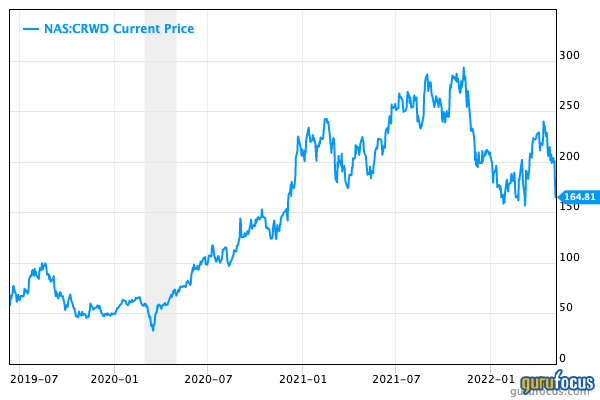 CrowdStrike offers a leading “Security Cloud" software, which is on the Department of Homeland Security's approved products list. Its flagship platform (Falcon) covers multiple large security markets, including cloud security, corporate endpoint security, threat intelligence, identity protection and more. Endpoints such as Laptops, servers and internet of things devices are becoming vulnerable to cyber attacks as the world transitions toward remote working and the cloud.

The company utilizes the power of artificial intelligence and its proprietary algorithms to detect threats and continuously improve the system as more data becomes available. This creates strong network effects as more customers equals more big data, equals better AI and better protection for customers. The business is also protected with 65 issued patents and 102 pending ones.

It has an established customer base equating to 254 of the Fortune 500, 65 of the Fortune 100 and 15 of the top 20 banks. Customers include Mercedes-AMG, Virgin Hyperloop and Goldman Sachs (

CrowdStrike uses a “land and expand” strategy to win new enterprise customers. While offering a number of modules, the company gets its foot in the door with just one or two modules, before easily upselling to more. The strategy is working great so far as customers are not just growing, but sticking around and spending more. A great way of measuring this in software-as-a-service companies is via their net dollar retention rate. At CrowdStrike, this equates to above the 124% benchmark, which means customers are staying and spending more. Additionally, 69% of their customers are purchasing over four modules.

The founders of CrowdStrike are George Kurtz and Dmitri Alperovitch. Kurtz is a veteran of the cybersecurity industry with over 29 years of experience. He was the former chief technology cfficer at McAfee, CTO at General Motors (

GM, Financial) and founder of Foundstone in 1999, a worldwide security company. Kurtz owns 5.3% of the company and thus has skin in the game.

Crowdstrike smashed Wall Street's expectations with annual recurring revenue coming in at $1.73 billion, which is up an incredible 65% year over year, beating analysts' expectations of $1.68 billion. 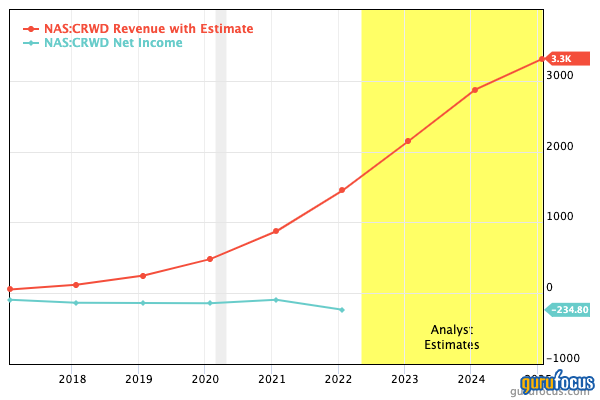 The company also reported adjusted earnings of 30 cents per share for the fourth quarter of 2021, equating to $431 million in revenue. This was above analysts' expectations of 20 cents and $411 million in revenue. In addition, the company has just become free cash flow positive with a record $442 million for the year.

As a software company, gross margins are super high at 76%, but operating margins are negative it invested heavily in research and development as well as sales. Thus, it has a GAAP loss from operations of $142 million, compared with $92.5 million in the prior year. Personally, I think the R&D and sales investment is the right strategy especially as the company is in such an early stage of growth. With $2 billion in cash and $738 million in long-term debt, the company's balance sheet is fairly healthy, in the short term anyway. 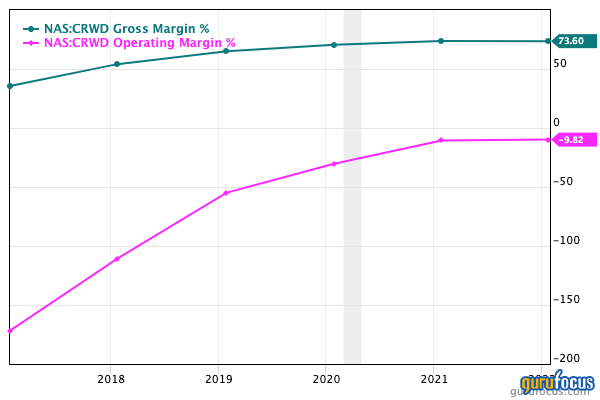 In order to value CrowdStrike, I have plugged the latest financials into my discounted cash flow model. I have estimated 60% growth for the next year and 50% for the next two to five years. In addition, I have predicted margins will expand to 23% as the company's sales and R&D bets start to pay off. 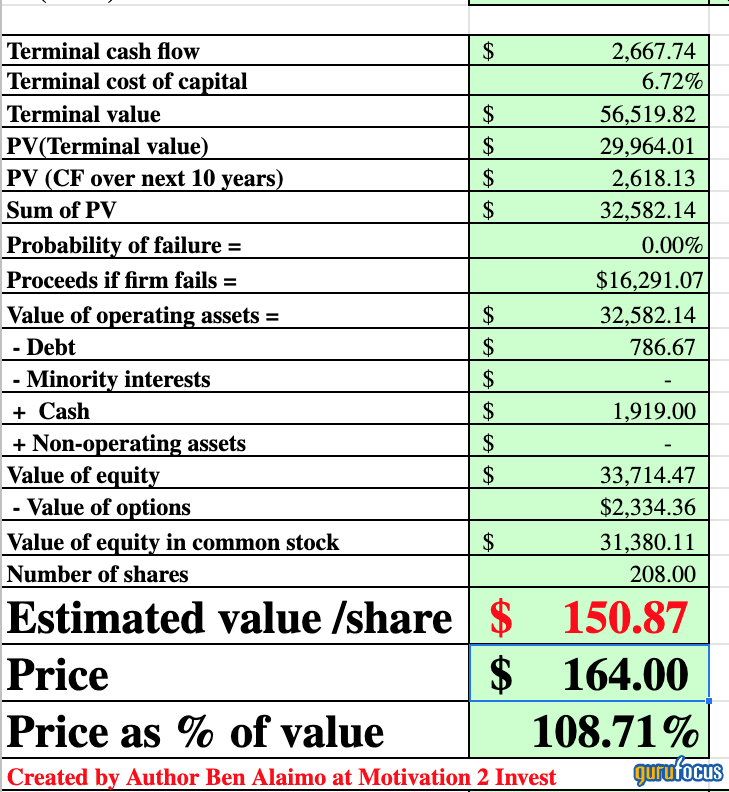 From these estimates, I get a valuation of $151 per share. The stock is trading at $164 after the recent pullback and is 8% overvalued at the time of writing. This shows investors have slightly more bullish estimates than my own predictions baked into the stock. These forecasts may come to fruition and the company has a track record of high growth, but I like to be conservative for valuation purposes, especially given the current market for growth stocks.

Analyzing the stock's forward price-sales ratio of 20, it is looking cheap relative to historical metric of over 50. 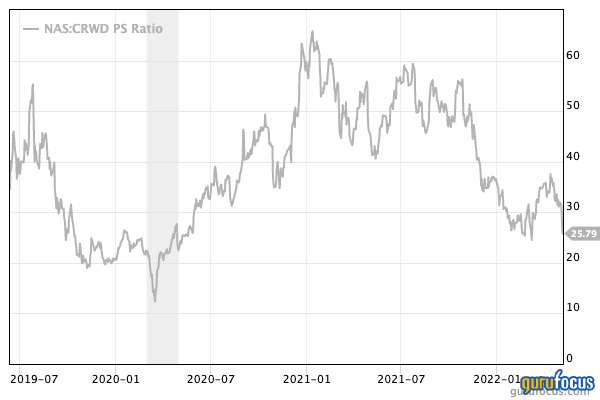 The GF Value Line also indicates the stock is cheap relative to historic multiples, but also warns of a possible value trap, which is definitely not an issue in this case. 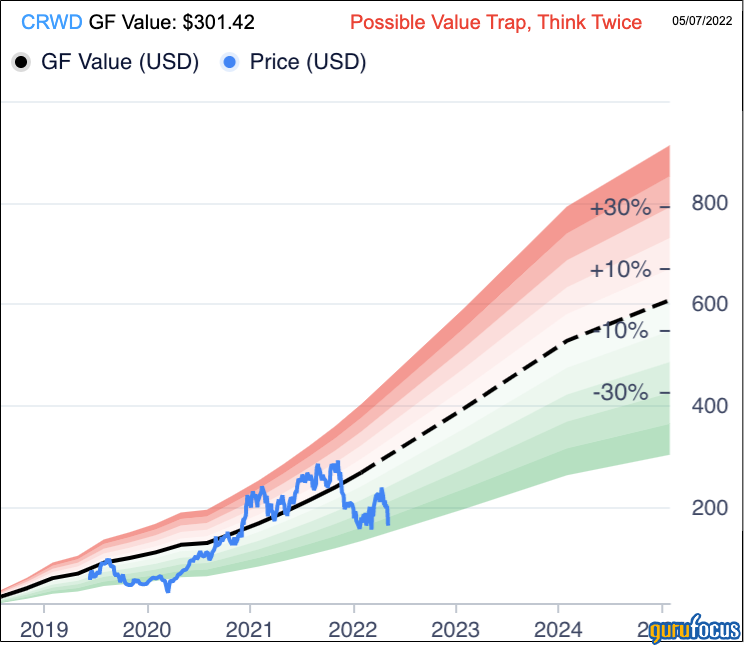 CrowdStrike is a fantastic company and true leader in the cloud security market for enterprises. The company’s “land and expand” sales strategy is working wonders as the company is growing its customer base rapidly. After beating Wall Street expectations and with strong growth projections, the company is poised for continued growth. The macro conditions of increased remote working and geopolitical uncertainty should act as growth tailwinds behind the industry and make the purchase a no-brainer for enterprises. The valuation has gotten better, and you could say the stock is only slightly overvalued if the growth projections play out. However, the high inflation environment and a suspected rise in interest rates is compressing the multiples on all growth stocks, which means there are plenty of opportunities in the market.