Teladoc Drops 45% on Poor Earnings; Has the Market Overreacted?

Teladoc is a leader in virtual health care

TDOC, Financial) had a disastrous first quarter of 2022, culminating in the share price plummeting by 45% in a single day on Thursday when the quarterly results came out, which is the highest single-day drop in the company’s history. Even prior to this, the share price had slid down substantially from the highs in February 2021, mainly driven by the decline of the so-called "pandemic stocks," or stocks that were bid up to insane valuations as investors saw they were benefitting from the pandemic. Teladoc has now lost 90% of its market value since early 2021. The question is, is the market overreacting? 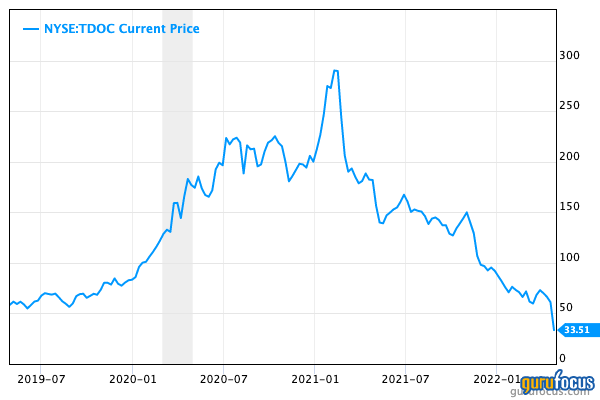 Now, this may seem like a disaster, but when we dive into the reason for the loss, we see the majority of this was driven by a non-cash goodwill impairment charge. This is basically the process in which an accountant revalues the goodwill on the balance sheet. Goodwill is a non-tangible asset which is usually obtained from an acquisition, in this case the acquisition of Livongo. Taking this enormous goodwill impairment charge means that Teladoc overpaid for the acquisition, but really it is just a paper adjustment. Without this, Teladoc’s net loss was just $75 million, which is more positive than the prior-year quarter. 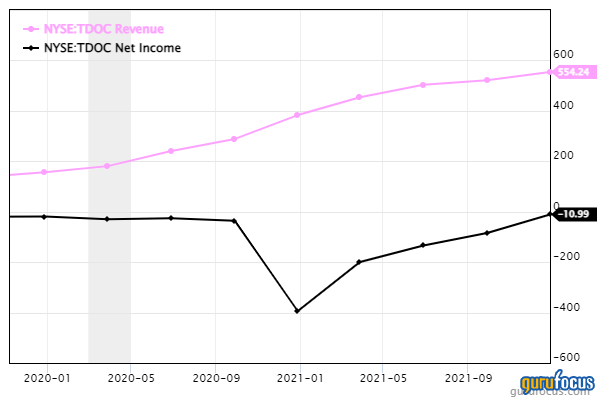 The good news is the company reported revenue growth of 25% year-over-year and average revenue per U.S. paid member increased to $2.52, up from $2.49 in the year-ago quarter. The company did report a slight dip in adjusted Ebitda, which was down 4% to $54 million, and their adjusted gross margin dropped by 0.9% to 66.9% compared to the prior year.

These signals weren’t great, but generally do not justify a 45% decline on top of the prior year's decline in price. I believe the market is highly sensitive and volatile right now, and thus has overreacted.

According to the GF value line, a unique intrinsic value calculation from GuruFocus, the stock is significantly undervalued. 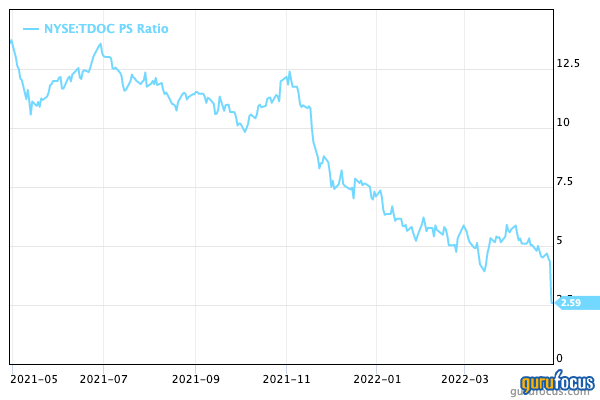 The company reported $836 million in cash and cash equivalents. If we add in the accounts receivable, we get close to $1 billion, with minimal debt. The company is trading at just 5 times it’s cash position today.

Cathie Wood’s Ark Invest is Teladoc’s largest shareholder with a 12% stake in the company. This is now worth an estimated $652 million, down from $1.1 billion just last week. The investment firm added 610,000 shares on Monday prior to earnings and bought more as shares tanked on Thursday, according to Wood's comments (as always, investors should take such comments with a grain of salt, as these trades have not yet been reported via regulatory filings).

AMZN, Financial) to allow doctor visits to be booked via an Alexa device. This is great news for the company and should add another unique customer acquisition channel moving forward.

Teladoc is still the largest virtual health care provider in the U.S. with ~54 million paid members expected in 2022. They are still growing revenues, and analysts believe they have the "most robust platform" in the health care industry. The company’s previous rich valuation in 2021 has now corrected down heavily.

On the other hand, they are facing increased competition in the industry. I do believe the market has overreacted to this recent loss as it was down to a goodwill impairment. The majority of analysts have downgraded the stock, but still have a buy or hold rating.