Update: The results have been updated by removing all the OTC-stocks from our back-testing sample. We decided to make this change because extremums in OTC-stocks may cause inaccuracy of results.

When choosing filters to screen stocks, it might be confusing how the criteria behind these filters affect stock price performance and how well they can anticipate a high stock return. We might have an overall framework in our mind about which financial indicators might have a positive influence on a stock's performance and which do not. However, will those indicators operate the same as we expect in practice?

This research looks into all the filters in our GuruFocus All-in-One Screener to see how their values are correlated with the performance of stocks.

Results may differ for different testing periods. This article mainly introduces and analyzes the 12-month back-test result of U.S. stocks. Based on our back-testing result on August, there are nine filters which showed notable positive correlations with the stock's 12-month returns and one filter which showed negative correlations. Some results are in agreement with our "common sense," while others are not.

1.The back-test research looks at all the primary or most actively traded shares of a company in the U.S. All the stocks traded Over-the-counter (OTC) are excluded.

2.We sorted all the stocks from high to low by the filter value at the beginning of the back-test period. Then, all the stocks were divided into ten groups based on the sorted sequence.

3.All the prices we used in this research were close prices adjusted for splits.

4.The stocks delisted during the research period were not included when calculating the performance.

5. The back-testing result is calculated based on 12-month stock price performance.

As showed in the graph below, the filters that have positive correlations are: 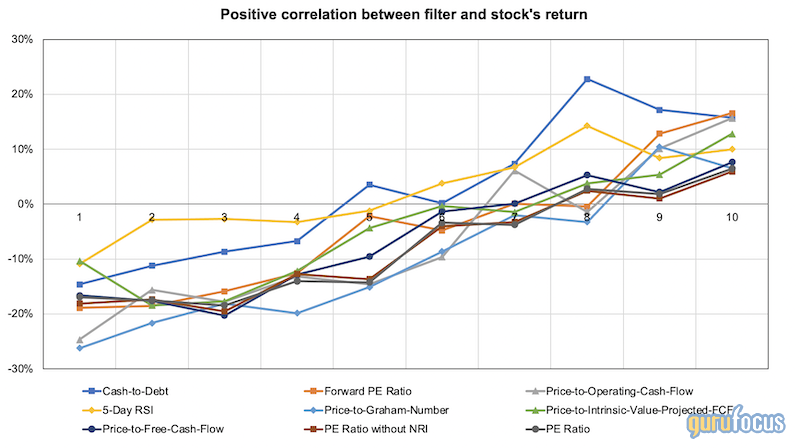 Among the filters that have strong positive correlations, valuation ratios take up a large proportion, such as forward PE ratio, price-to-operating-cash-flow and price-to-intrinsic-value projected by FCF (i.e. free cash flow). Generally speaking, value investors assume that stocks are worth investing in if these valuation ratios are at a fairly low level. However, during the past 12-month period, the stocks that have high valuation ratios did better than those that seemed undervalued. The discrepancy between the back-testing result and our common sense might be caused by the following reasons:

Secondly, the classification of different groups is based on the values of each filter at the beginning of the back-testing period and all the delisted stocks are not included when calculating the performance. Thus, there might be survivorship bias in the result which caused a higher return.

Lastly, the performance might be influenced by the overall market and other uncertain scenarios that happened during the back-testing period.

Meanwhile, some ratios above do agree with our common sense, e.g, cash-to-debt ratio. The cash-to-debt ratio illustrates how much time it would take a company to pay off all of its debt if it used all of its cash and cash equivalents for debt repayment. A high ratio indicates a company is better able to pay back its debt and thus has better financial health. A company's stock tends to perform better if the company has a healthy financial status.

Demonstrated by the graph below, there was only one filter that had a significant negative correlation with stock price in this study:

Joel Greenblatt (Trades, Portfolio)) % is calculated as operating income divided by enterprise value. This metric is introduced in Joel Greenblatt (Trades, Portfolio)'s book, "The Little That Beat the Market." It reflects the company's profitability relative to its stock price. Again, this result seems contrary to our common sense, which could be due to the reasons stated above.

Please note that this research only gives a rough understanding of how the filters were correlated with stock returns over a specific period of time. All the results are obtained by back-testing. However, the results might be affected by many realistic or occasional factors, and past performance doesn't indicate future performance. Please use the results of this feature with caution.

This correlation is updated once a month and the effectiveness of the filters are indicated on the GuruFocus All-In-One Screener.