GuruFocus users can now assign stocks into one of several baskets 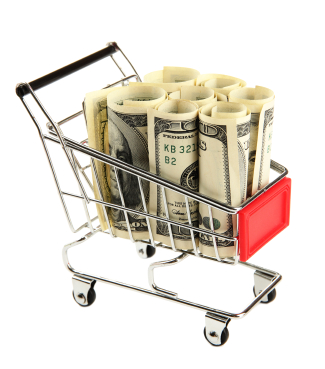 We are glad to announce a new feature on GuruFocus where you can place a stock into one of several virtual "baskets:" buying, considering, researching and not interested.

GuruFocus now allows you to vote on whether you have placed a stock into one of four baskets:

Figure 1 illustrates a sample screen shot of the basket feature for Walmart Inc. ( 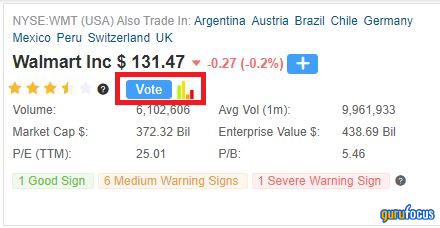 Selecting a basket in GuruFocus

To place a stock into a basket, hover your mouse over the “Vote” button and then select the appropriate basket based on your investing research and circle of competence. The “Vote” button changes to the selection you made: Figure 2 illustrates the result of selecting “Buying” for Apple Inc. ( 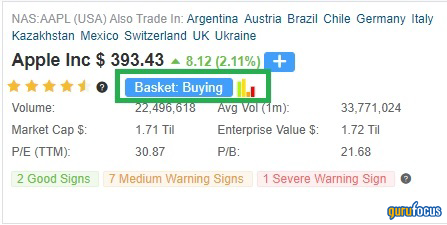 Tracking votes for each stock

As of Tuesday, July 21, the most-voted stocks for each of the four baskets are as follows:

With nine votes, Intel is the most-voted stock in the Buying basket as of Tuesday.

GuruFocus ranks the Santa Clara, California-based semiconductor giant’s profitability 9 out of 10 on several positive investing signs, which include a high Piotroski F-score of 7, a four-star business predictability rank and an operating margin that has increased approximately 4.10% per year on average over the past five years and is outperforming over 97% of global competitors.

Gurus with large holdings in Intel include

With seven votes, Apple is the most-voted stock in the Considering basket as of Tuesday.

GuruFocus ranks the Cupertino, California-based consumer electronics giant’s profitability 10 out of 10 on several positive investing signs, which include a high Piotroski F-score of 8, a 4.5-star business predictability rank and an operating margin that is outperforming over 96% of global competitors.

Berkshire Hathaway owns over 245 million shares of Apple as of the March quarter filing.

With four votes, Corcept is the most-voted stock in the Researching basket as of Tuesday.

The Menlo Park, California-based company discovers, develops and commercializes drugs for the treatment of metabolic, psychiatric and oncologic disorders by modulating the effects of cortisol. GuruFocus ranks the company’s financial strength 8 out of 10 on the back of cash-to-debt and debt-to-equity ratios outperforming over 77% of global competitors.

With 14 votes, Tesla is the most-voted stock in the Not Interested basket as of Tuesday.

GuruFocus ranks the Palo Alto, California-based electric vehicle giant’s profitability 3 out of 10 on several warning signs, which include declining gross margins and returns that are underperforming 74.17% of global competitors.

Disclosure: The author is long Apple and Intel. The mention of holdings in this article reflect holdings as of the March quarter and do not include any trades made during April-July. Per Securities and Exchange regulations, quarterly portfolios are due 45 days after the quarter ends.